This is the first book in the world engaged in the unexplored study of comparative maritime law.
This comparison was made with respect to the Moroccan Maritime Code of 1919 which was inspired by several foreign maritime laws and by international conventions implemented later. This Code was, incidentally, the first in the maritime world to consider the protection of shippers by referring to the U.S. Harter Act of 1893, which was introduced in its provisions.
Analyses undertaken in this book delve into many foreign maritime laws, in particular English, French and American laws. Those chapters devoted to the comparison of Moroccan maritime law with that of 19 other countries yields differences more of detail than of principle. Often, the distinctions that may be made are mitigated by the use of the same international conventions. Morocco, like most of the other 19 countries analyzed in this book, is very supportive of the international unification of maritime law.
While this comparative study of maritime law applies only to 19 countries, these countries are all major maritime players: Germany, France, Greece, Great Britain, Italy, the United States, Mexico, the Maghreb countries, Australia, United Arab Emirates, Turkey, Singapore, China, Japan and the Ukraine.
While the studies in this book are of individual countries' maritime law, each was written by a renowned maritime legal expert from the country concerned and addresses all of the practical aspects of that country's maritime law, marine environmental protection, construction and sale of ships, maritime liens and seizure, liability of the shipowner, nationality of the ship, ports regime, seamen, piloting, towing, transport contract, sea events and marine insurance.
Perhaps most importantly, each study provides clear guidance and direction to the maritime jurist or shipowner so that he or she can properly direct his or her research.

After high school, Prof. Hassania CHERKAOUI enrolled at Paris University for licensing in English; then completed her studies by enrolling at the Law Faculty of Casablanca where she earned a LL.M in private law, a postgraduate thesis and a PhD in private law (1986). Prof. CHERKAOUI furthered her education by spending time with an English law firm and in the USA at Boston University. In 1982, she joined the Faculty of Law as assistant professor (4 years), lecturer (4 years) and professor (26 years) where she has taught international maritime and aviation law, commercial law and civil law.
Caractéristiques 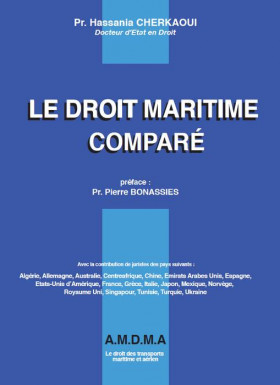